On the far right, there's the chonker Opus 88 Omar in yellow. I had Opus 88 eyedropper pens on my wishlist for a while now, because I was always sad to not be able to bring a fountain pen on planes without worrying about their ink exploding. It's still possible for this pen to explode ink, but it has a feature to shut off the ink from going into the feed (I think it's called japanese-style eyedropper), which is very appealing! I was gunning for the clear demonstrator (it wasn't on sale haha) but I am now kind of enamoured by how Omar in yellow looks like the fat baby of my TWSBI Eco clear x Lamy Safari yellow. It's a really fat pen...I read reviews about how it can cause hand fatigue, especially for small hands. I am also a small handed person but I suppose I'm generally not writing for hours straight.

The barrel of yellow Omar is semi translucent with a yellow/green tinge, but you can see the ink levels and ink colour within. Right now I have Lamy turmaline inside. I chose a M nib because you gotta use up the ink!!! It writes very smoothly. It does take more turns to unscrew the cap, so it's not a quick reactive pen...

The Tomoe River paper I chose is 52gsm (100 sheets, 200 pages), it's significantly thinner than my Midori MD notebook diary (175 pages). Practically half the width? 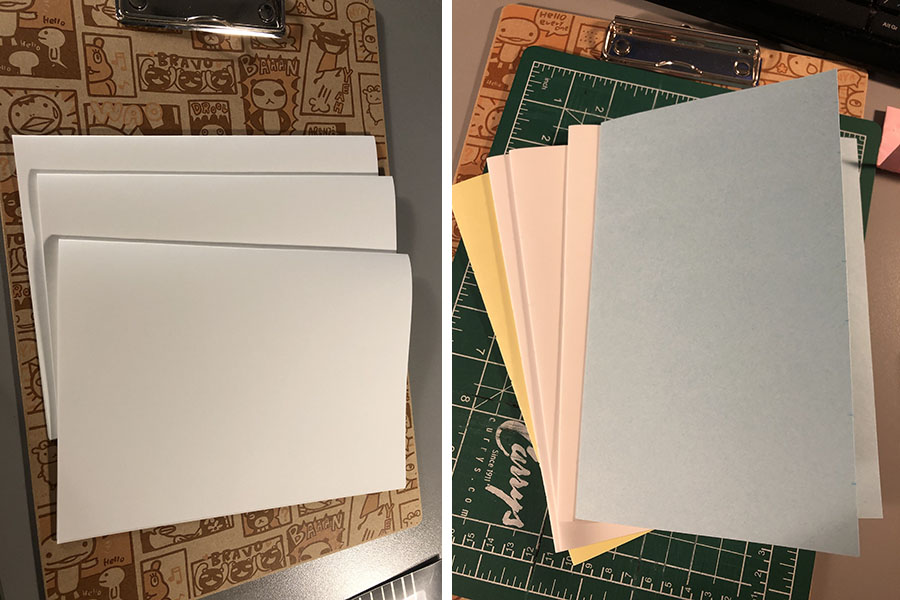 I took 30 A4 sheets and made 3 signatures with 10 A4 sheets each. I also folded some cardstock I had for the covers. Purist bookbinders will scoff at how I'm likely folding against the paper grain (I always do, TBH, ziney DIY forever!). I didn't want to deal with spine width, so it's just exposed.

I was over-confident about my signature sewing abilities...after making many HWA books I thought I was a-okay, but I forgot that I didn't have arms/bands to attach the signatures to, so my book block was super loose and I had to hack it together with knots. It's riddled with rookie mistakes that could've been avoided if I just used my brain to think instead of relying on my previous auto-pilot program. Thus, the block is not as tight/compact/neat/aligned as I would want. It's kind of embarrassing, but nobody will really see it anyway.

To cover my shame I used some washi tape on the spine and on the covers. It's B-side label washi tape that I think someone gifted to me long ago. Maybe due to age, but I find that the glue on this tape transferred to the tape underneath (on the roll) so overall it's not sticky in the right way?

At the end of the day, what mattered to me was having something lightweight and that laid flat. When folded to A5, this means this notebook has about 120 pages to write on (front/back).

Pens do write smoothly on this paper. As expected, there are longer drying times and susceptibility to smudging. Although the paper is thin, I don't personally mind the show through.

I still have 70 A4 sheets left, which translates to 560 A5 pages to write on in the future.

Mostly by accident, I found out that Borden and Riley's #37 Boris Marker layout paper is also a potential choice for fountain pens users. These are not particularly great photos for colour accuracy, but I don't see any bleed through at all.

Makes sense since it was made for markers! It has more tooth if people like feedback. I had a bunch from my traditional inking/drawing days. I still have so many pads of paris bleedproof paper...

Price wise you do get more bang for your buck with Tomoe River than artist supplies...ahhhh

Today's music post: Evig Pint by Kaizers Orchestra. My friend Mike introduced this band to me a long time ago. I'm actually listening to their music for the first time with new earphones and it feels like a whole new experience...!

I get really into product research, especially before a purchase. It doesn't even have to be a significant $ purchase...but I'll still spend 10-40h+++++ looking around, making sure I know ALL the options, am supporting the BEST shop, and am investing in the BEST thing. Oftentimes I don't find exactly what I want and I default to the easiest option instead...

This time, the topic of my research fervor were fountain pens (FP) and fountain pen-friendly paper/journals (to a lesser degree, inks). The reason for this is because I made a decision to get back into journaling. At work I've nearly moved to full digital to save on paper and print outs. In my personal life I'm a mix of both. For a few years I maintained a 5-year journal but I travelled a lot and carrying this giant thing around was unideal for a minimalist packer. I abandoned it 3.5 years in because it became incomprehensible. Also the paper was not FP friendly. What I did like about it was that it had limited space for every day so it was a very easy task to write a sentence or two.

I actually don't remember when I got my first fountain pen; it quite a few years ago. It's a Safari Lamy (fine) in yellow. After that I got a Pilot Metropolitan (medium) and V-pen. These are all what the "community" would describe as "beginner pens" but I'm honestly quite satisfied with them! Don't have to be too precious. I love the feedback that fountain pen nib gives you on paper, as well as the idea of not chucking disposable plastic pen bodies into the waste, because you can refill fountain pens (I use converters/piston/syringe). After all those I also got some Platinum Preppys and a TSWBI Eco clear (stub). Many people who get one fountain pen end up with many more because it opens up a whole new world of drawing/writing in whatever colour you want.

Although I was enjoying my fountain pens, the Moleskine I was using at the time was really bad for it. After I moved on to Leuchtturm1917 it got a little better, but still significant bleed through with the wet inks I had (I have an entry about my Leuchtturm). Then I got a blank Traveler's Notebook insert, which has Midori MD paper. WOW!!! GAMEEEEEEEEEE CHANGER!!!!!!!!!! My beef with the Traveler's Notebook (TN) was that its regular sized TN system is slim A5, and I prefer full A5. So the hunt continues.

Luckily Midori uses their Midori MD paper in A5 size (and others) to make notebooks beyond the Traveler's Notebook brand. I hope you all take some time to browse Midori MD's website because it's Japanese minimalism at its finest. Their craft page in particular gives you a behind the scene look at how they make their products, which really appeals to my love for artisanal products.

The other product that came up on my radar was Tomoe River paper, which is known to be in Hobonichi Techo (daily/weekly planners). All reviews mentioned that while it is VERY nice to write on, it was very see-through (though they have both 52gsm and 68gsm weights now), the ink takes longer to dry, and it's harder to find/more expensive. It's known to be the best paper to show off fountain pen inks with sheen in them!

For now I decided to get Midori MD Notebook Diary (A5) because they actually had suppliers readily in Canada with stock. What attracted me to Midori MD books was how clean it was, lay-flat, amazing white space around the calendar, and FP-friendliness. It also has covers and notebooks in sizes that are cross compatible with other brands. Since it's halfway through 2020 I got a DEEP DISCOUNT on this 2020 planner ;)

I also got a Platinum carbon black desk pen [EF]. I wanted this for waterproof ink and assume that the fountain pen feed is optimized to take pigmented ink. I thought it was going to be REALLY EF but I've used 0.05 pigment liners before so this didn't feel that extra fine to me. I feel reassured that a steel nib is more reliable than the pigment liners tips though! The EF nib definitely has more feedback, so I'll have to get used to it. Now I can really phase out my fineliners and write on envelopes!

Also got 2 new inks to round out my warmer ink collection (not shown: Noodler's cactus red). This includes J. Herbin Diabolo Menthe and Diamine Meadow. I don't have any consistent brands!

Shortly after I took a cutter to the pen and cut it down to length. Now the cap posts properly. Maybe it's slightly too short now??? Good thing I have small hands, haha.

During my research I uncovered several new online Canadian stationery stores that I didn't know about. I always try to avoid evilRiver website.

Here is my compiled a list of Canadian vendors of fountain pen and adjacent goodies.

Today's music post: Bloodywood - Machi Bhasad (Expect a Riot). Bloodywood is a metal band from New Delhi, India. I enjoy the cultural mix of sounds/instruments and visuals! Their new and original releases are quite wholesome with regards to their messaging, and they've paired philanthropy with the releases as well. You can support their Patreon!

I'm Dirchansky (she/any), a storyteller and comic creator living on the lands of Indigenous people in 'Canada'.

This is a space where I freely talk about anything I want; all opinions are my own.

Copyright Dirchansky © 2022. Do not copy, reproduce. download, or directly link to any images from this website without written permission from Dirchansky. | BLUDIT