I talked about this in passing in my analogue daily journal post, but I added a few more things to round out the system, after using the other journal/planner combo for a few months.

Midori MD Notebook light (grid) serves as the planner for the year, with monthly view spreads. I've put it inside an Aranzi Aronzo notebook jacket. There's 1 spread for the year, then 13 spreads for each month (Jan-Dec 2021 + Jan 2022). I drew a different little plant icon on the corner of every monthly spread.

I added a few pages for projects, media, achievements, and a loose habit tracker.

I'm doing fountain pen "paper tasting" for 2021, meaning I'm going to journal in separate and different lower-page count notebooks, every 2 months or so. The first one to go is...

I got some of their basic sewn brown kraft notebooks that were marketed as being suitable for fountain pens. 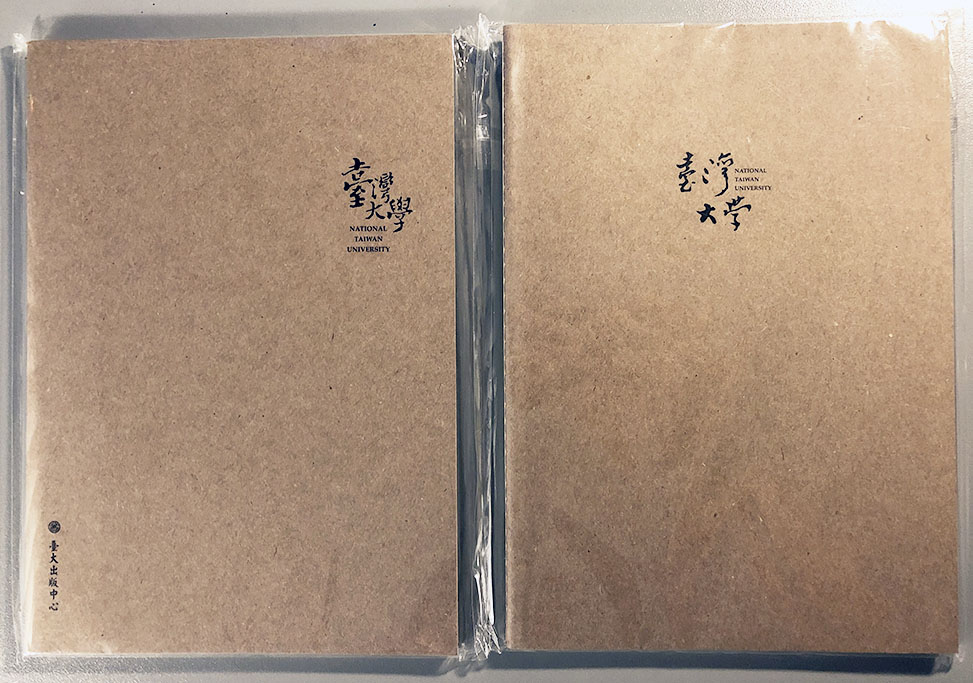 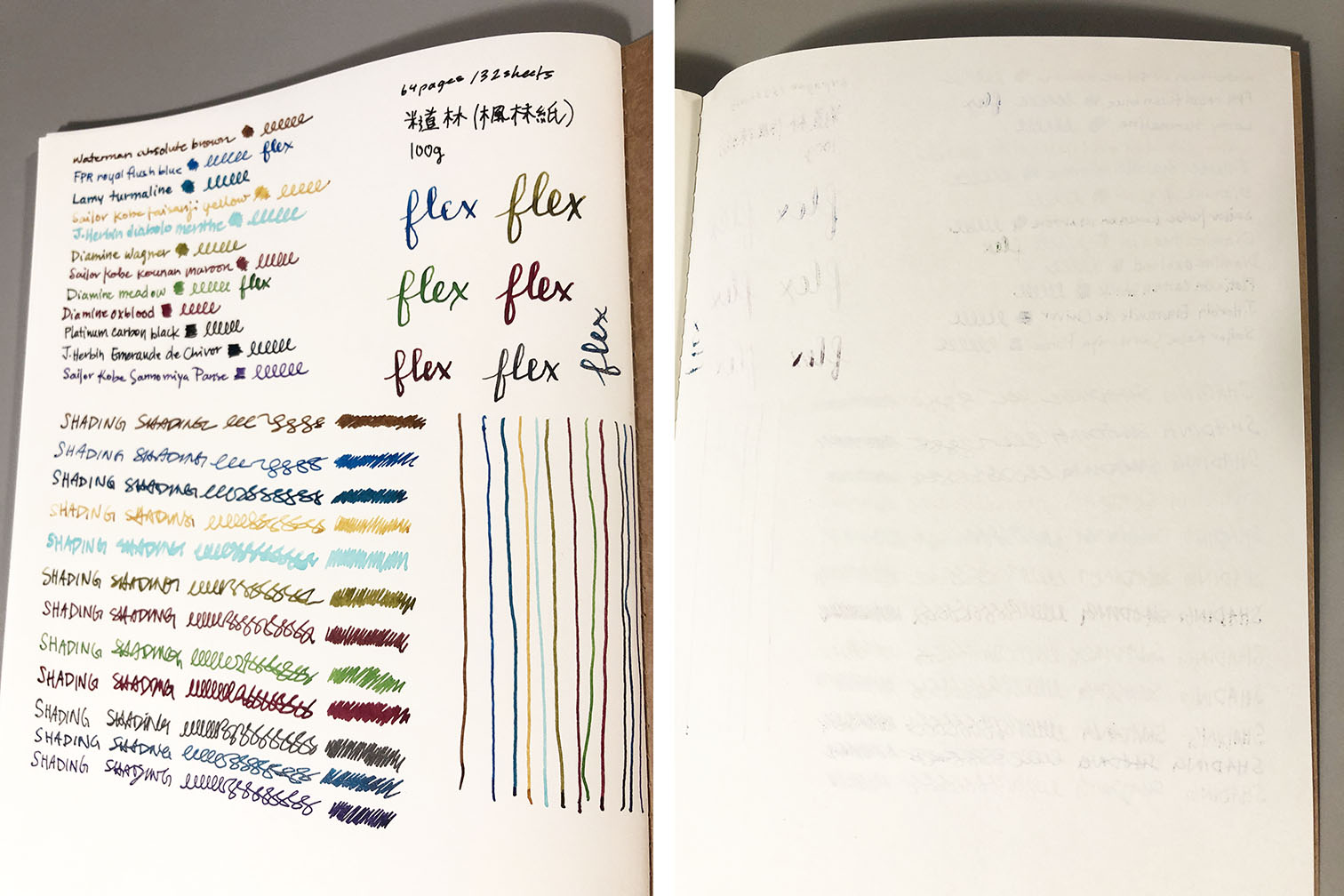 Most of my inks did fine on the paper. The ones that feathered and bled were Sailor Kobe Kounan Maroon, Platinum Carbon Black, and J. Herbin Emeraude de Chivor. FPR Royal Flush Blue was also a bit more prone to feathering, but not in a significant way (to me). 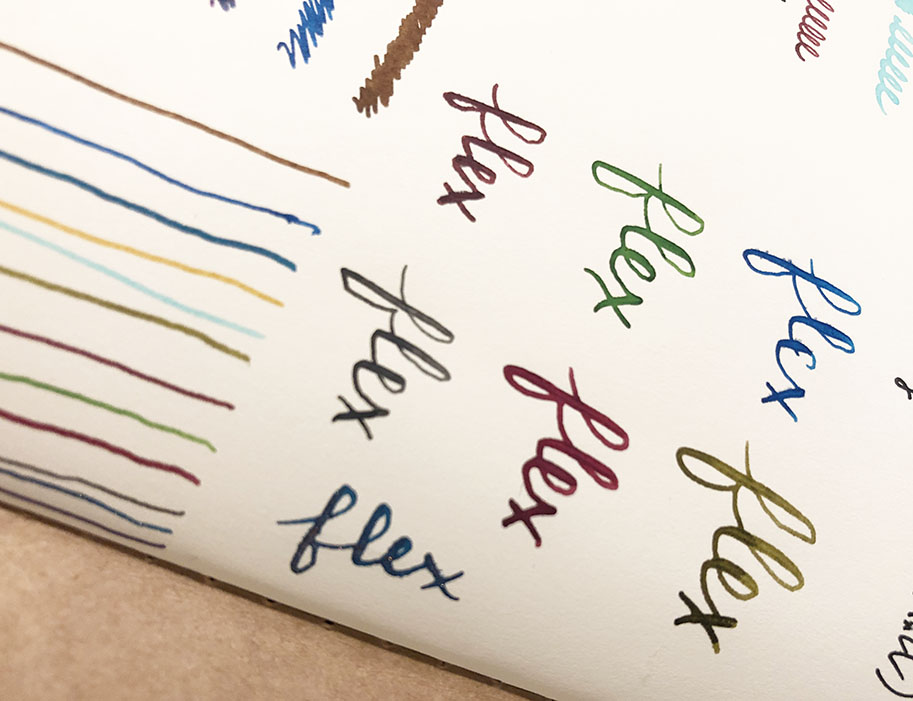 Pushing down on the nib with "flex" also caused the ink to selectively feather and bleed through on some other inks. 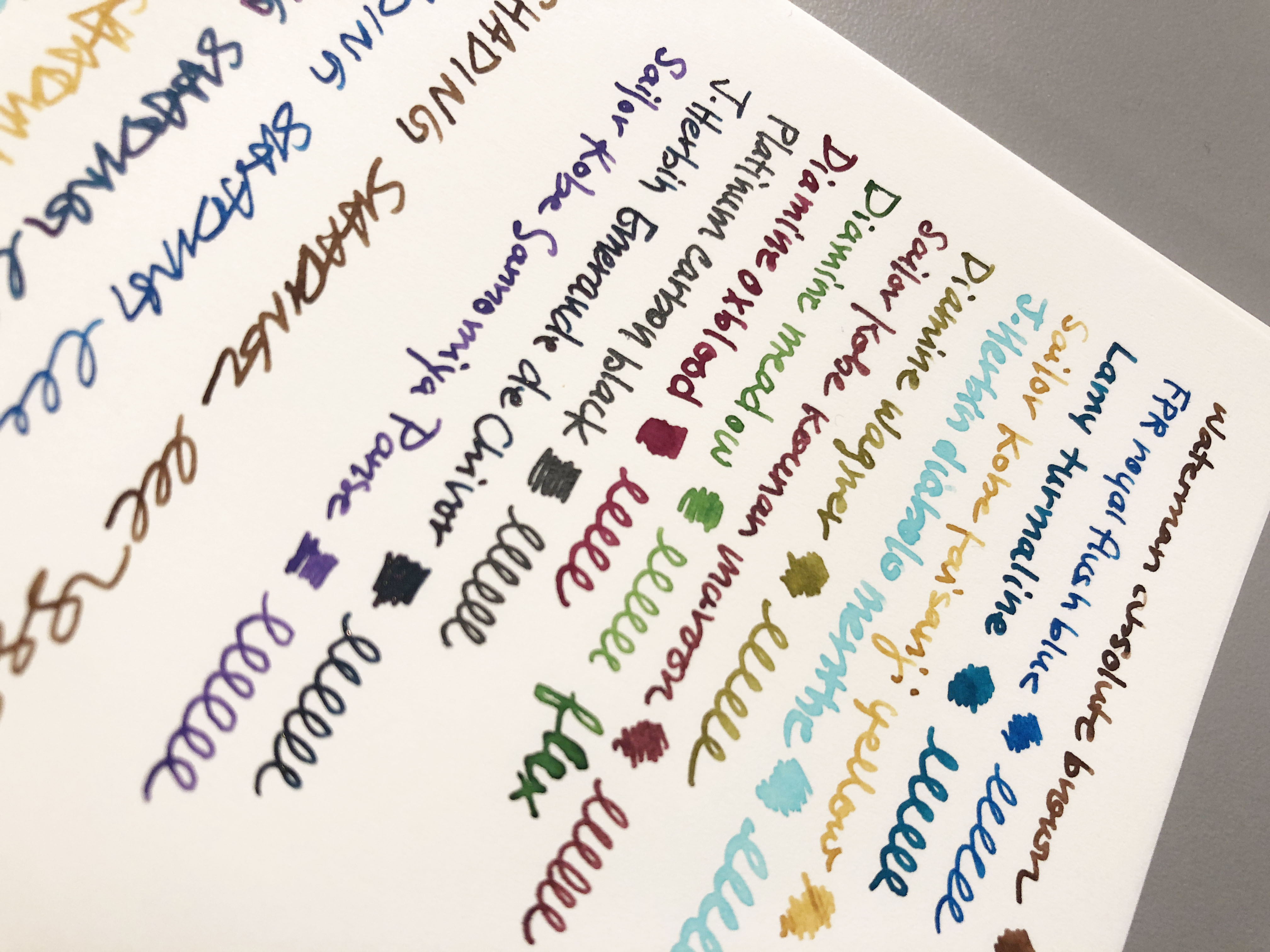 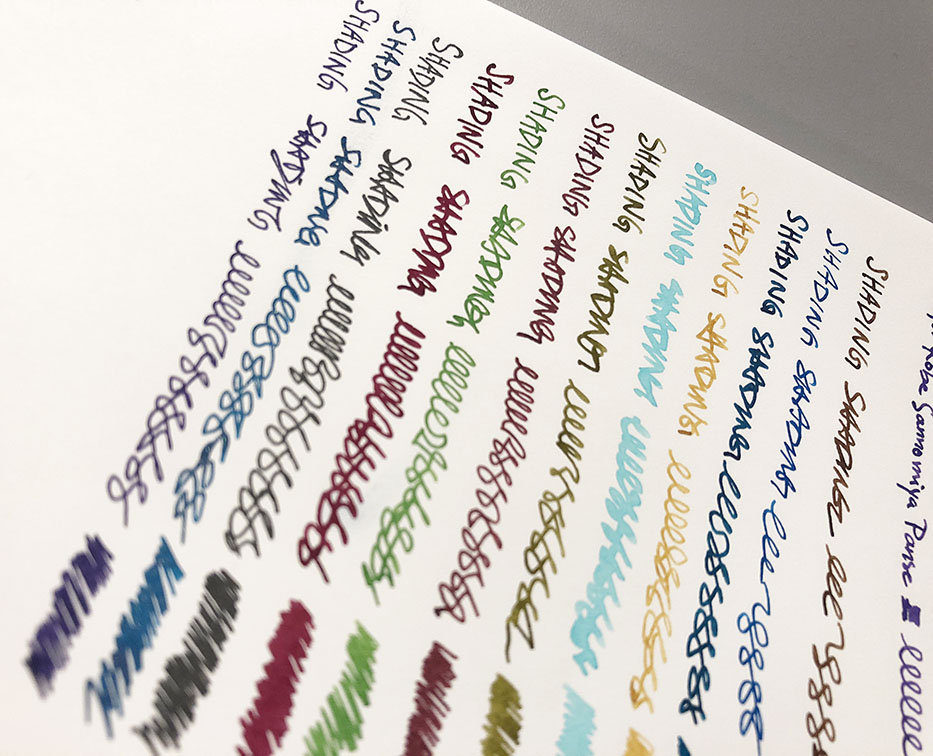 Compared to Midori MD and Tomoe River, shading on this paper feels slightly flatter for some inks. There is practically no pink sheen in FPR Royal Flush Blue here, and Lamy Turmaline shows very minor pink/purple sheen. Overall I find that inks appear brighter/lighter in appearance, much like they would on regular printer paper. 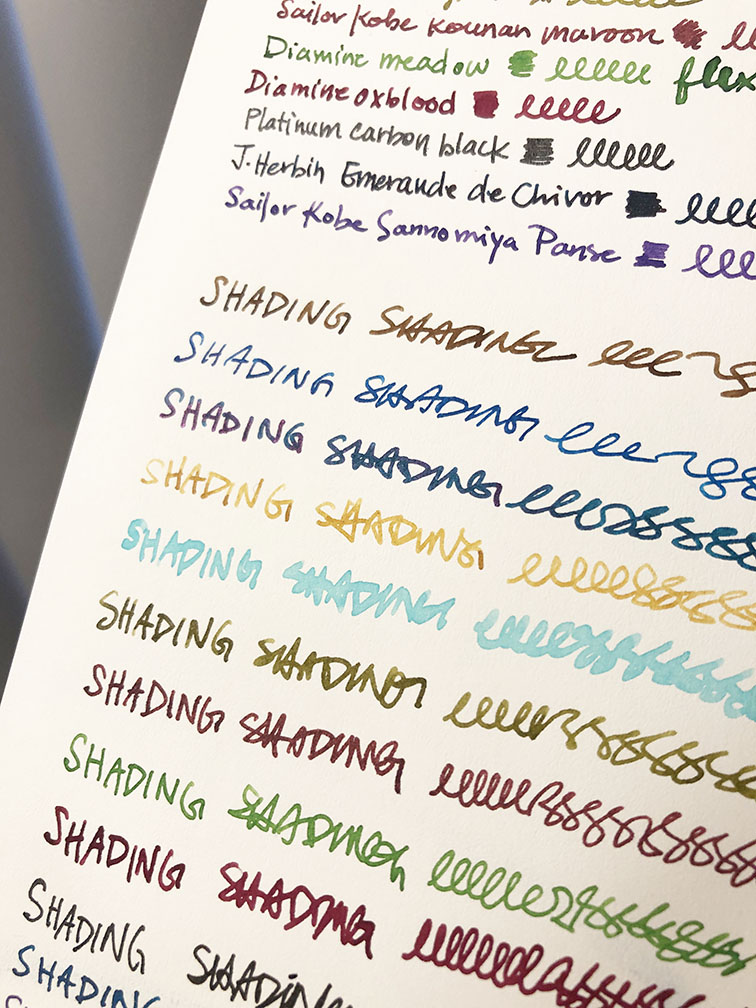 Overall, I think it's a solid performer! Dry time seems good too, at least good enough that I don't even think about it. 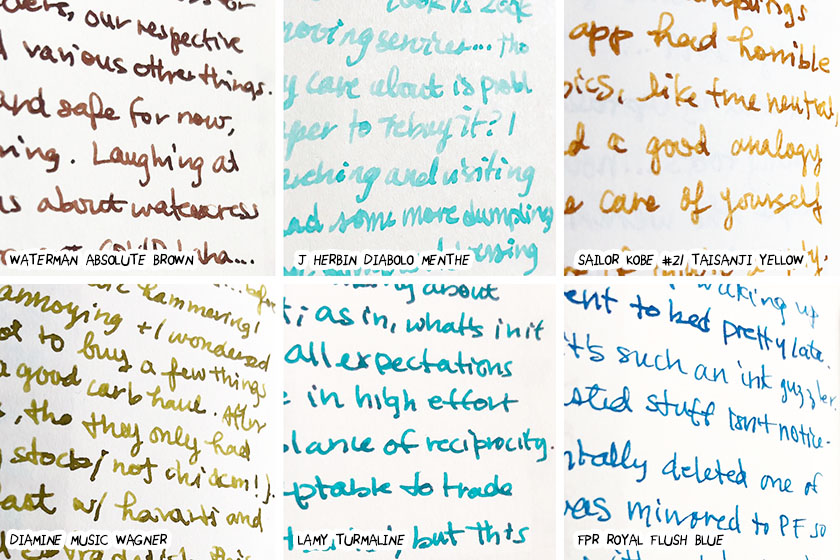 I bought some cute illustrated and perforated calendar sheets that I can paste into my journal. I might try to experiment with a bit more collage for this journal. Sometimes when the paper is expensive and optimized for FP ink I feel like I have to maximize all surface area for the ink, and not paste anything into it.

I also have this daily chinese calendar for FUN. I'm into this aesthetic sometimes; I was close to getting a chinese almanac, Tung Shing/通勝 for the year too. I wouldn't say that I'm particular about fengshui, astrology, or auspicious dates, but I wish I knew how to read the bottom part. 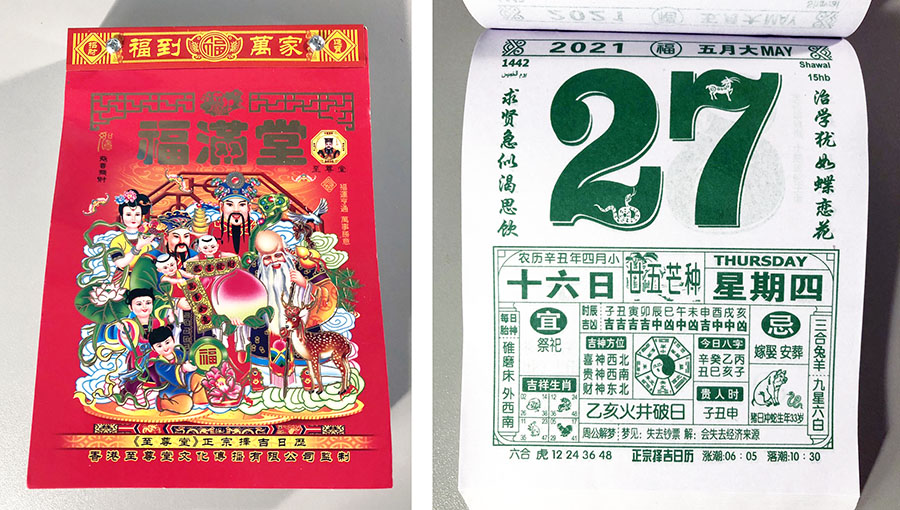 Today's music post: A compilation of Jane Zhang's (张靓颖) cover/rearrangement performances from the TV show Sound of my Dream (梦想的声音).

A while back I got an Oliver Exam fountain pen (pistol ink mechanism) for free with my Rangapens order. After letting it air out for a few months, it's still a bit smelly (it doesn't sit with my other pens because of its smelliness), but tolerable, so I loaded it up with J. Herbin's Emeraude De Chivor sample that I had lying around. 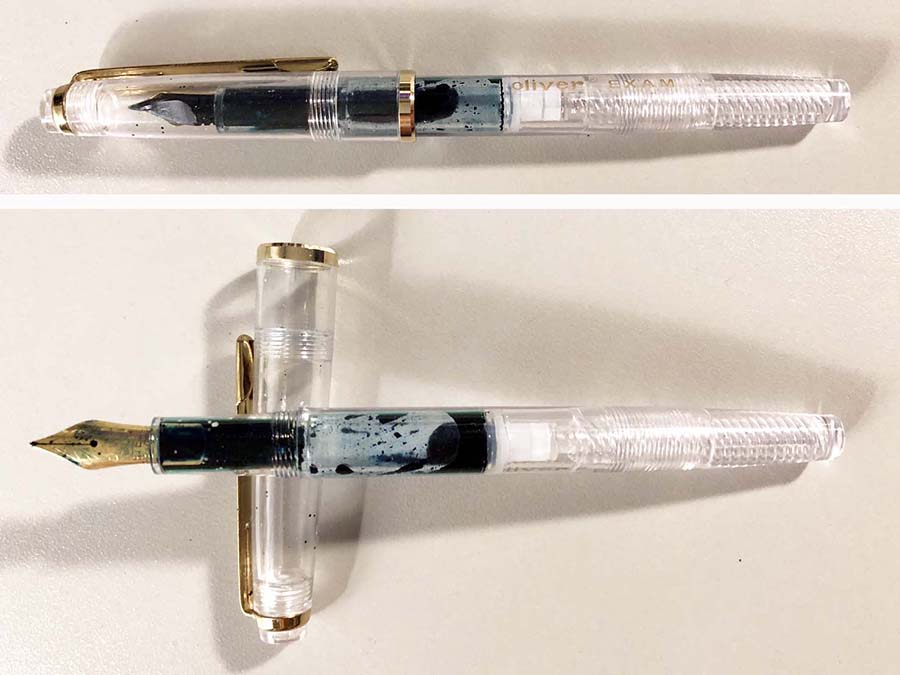 Wasn't sure what to expect (will it clog?! will this pen even write??), but it turns out that this is a great writer! It wrote wet right out of the gate; it's an ink guzzler! The nib (steel) feels softer than most steel nibs that I've used. Pretty shocking for a freebie pen! I think the nib says "Oliver 100 Steel B-CO", but I have no idea what that means. Might just be an Indian manufactured nib.

I saw these really cute chipmunk socks and bib and toy set by POMPKINS (ポプキンズ) and had to draw it as a memory...since I will not be able to wear these things. I've never been able to capture sheen and sparkle properly on photo (this is Midori MD cream paper) but it's way more prominent in real life.

After using it for a while, I have noticed that the ink is drying and evaporating out (?) while just sitting on my desk, capped. The ink in the piston-well gets lower and lower everyday even though it isn't being used everyday. Too bad since I really do like the nib! Still a viable pen for a some shorter term-intense glitter writing session, but it doesn't seem like it will be reliable to hold ink in the long run. Too bad since I enjoy the nib and would've loved to have it in my regular rotation!

Today's music post: Care by beabadoobee from the Fake It Flowers album. I get 90s girl indie pop rock vibes from her music. I have limited music knowledge, but kind of like Natalie Imbruglia, Sheryl Crow in back in the 90s/early 2000s, but her voice sounds sweeter and youthful!

Nakabayashi's Logical Air Swing notebook is fountain pen-friendly! Well, my bar for what is "fountain pen-friendly" is pretty low compared to other people. I'm willing to use any paper that at least has Level 0 properties (my made up, personal criteria):

There is no Level 2. This is getting into my " I will weigh the tradeoffs" for different contexts/purposes.

The Logical Air Swing Notebook satisfies Level 0 and Level 1 in my personal assessment. I'm not going to get into great detail since there are others who have done paper comparison with a greater degree of control measures.

As a paper/notebook x fountain pen lover, I've referred to John Bosley's fountain pen friendly paper rating list as reference for what fun new things to try out. He also has a good list of fountain pen, ink, and paper basics.

A while back, John reviewed Nakabayashi's Logical Prime Notebook and I ended up looking into their broader Logical notebook brand. They had a notebook called Logical Air Swing Notebook as well. The promo for the Logical Air notebook says that it's especially good for students to be carrying lighter weight paper in their bags.

Based on the logic (!) above, one might assume that Logical Air may NOT be fountain pen-friendly. It's interestingly close to the weight of many people's fountain pen grail paper Tomoe River/TR (52gsm). I see the value of TR but the dry time is a big trade-off for me.

Since I was making the best of my proxy shopping/shipping from Japan (Buyee), I threw in a A5 Logical Airs 5mm grid ruling into my order (from Fueru's Rakuten) and hoped for the best (they're ~180yen). Months later, they arrived!

I have the green cover A5 5mm square grid notebook with 30 sheets. The cover is a lightweight and flexible cover stock with a bit of a gloss coating.

It's one fat signature, sewn-bound down the middle.

The interior paper has a dotted line square grid, probably on ivory stock. 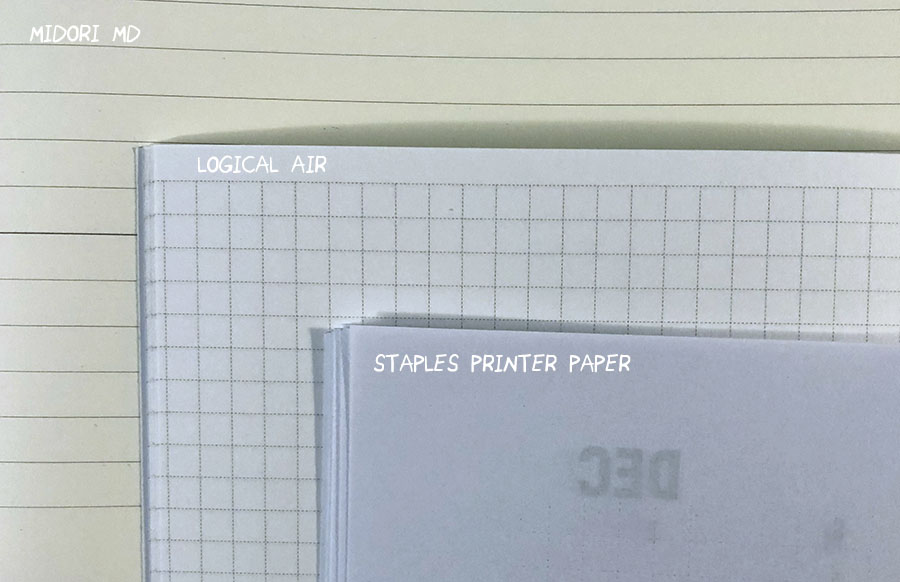 Writing on the page...well, how do I describe it. The paper feels uncoated. It is textured. It felt like I was writing on regular printer paper, but without the ink bleeding/feathering. As soon as my nib hit the page it felt like it would feather and bleed, but it didn't. 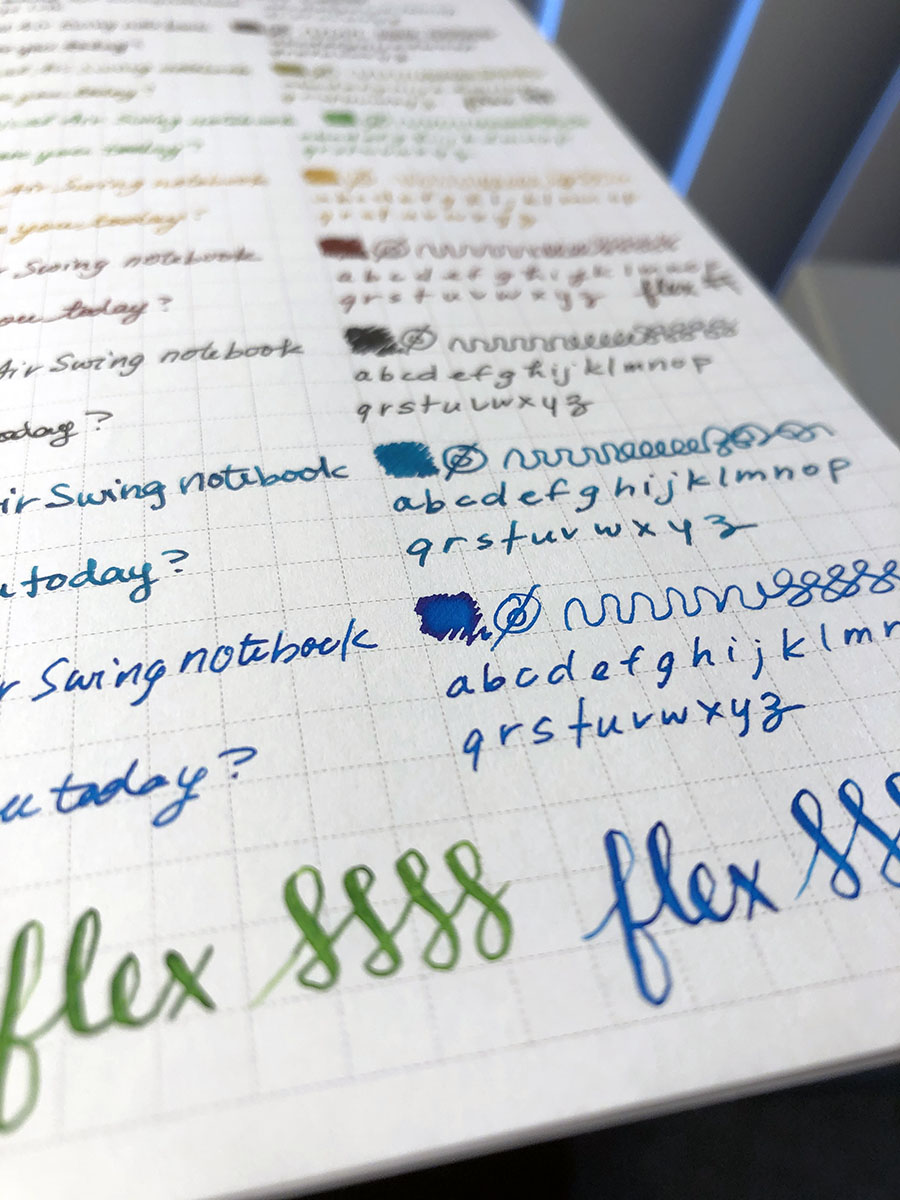 I don't think there was much (or any?) feathering, nor bleed-through. Whereas Rhodia paper hates me whenever I use flex nibs, this paper impressively handled it like a champion.

Backside of the page has ghosting, but feels less than 52gsm Tomoe River. It's still usable to me.

Overall I felt that my pen/inks probably wrote a bit dryer on this paper. I touched some of the Logical Prime paper in my order, and that stuff definitely feels smoother and coated to the finger, compared to Logical Air.

The paper does show shading and sheen, but probably less than Tomoe River. I think the dry time is faster though! As mentioned previously, it felt like my inks wrote overall drier because of lack of coating/absorption, and that could lead to less sheen too. I'm not good at photographing sheen, but I do see a bit of it in the Lamy Turmaline and FPR Royal Flush Blue.

[...] Fountain Pen Day is celebrated by enthusiasts worldwide as a time to embrace, promote, and share the use of fountain pens.

I didn't know it existed until this year. A few weeks ago I put up a currently using page that lists some of the materials I've been using, including fountain pens.

Why I appreciate fountain pens

I used my Platinum Carbon Black Desk Pen everyday in October to draw my tamagotchi aka #tamagoctober (cause it's water-resistant). I also used several pens (EF-M size) to do Alphonso Dunn pen & ink workbook exercises aka #dunn31. I completed 34+ exercises...but there are still many left.

Here are some pics of my pens and their respective #dunn31 exercises!

Today's music post: Give It Up 2 Me by Ojerime.

Staying indoors means too much time to futz around on the internet and fuel my fountain pen fever. Small pen day with Pilot Kakuno (M) and Sailor HighAce Neo calligraphy clear (2.0mm)! 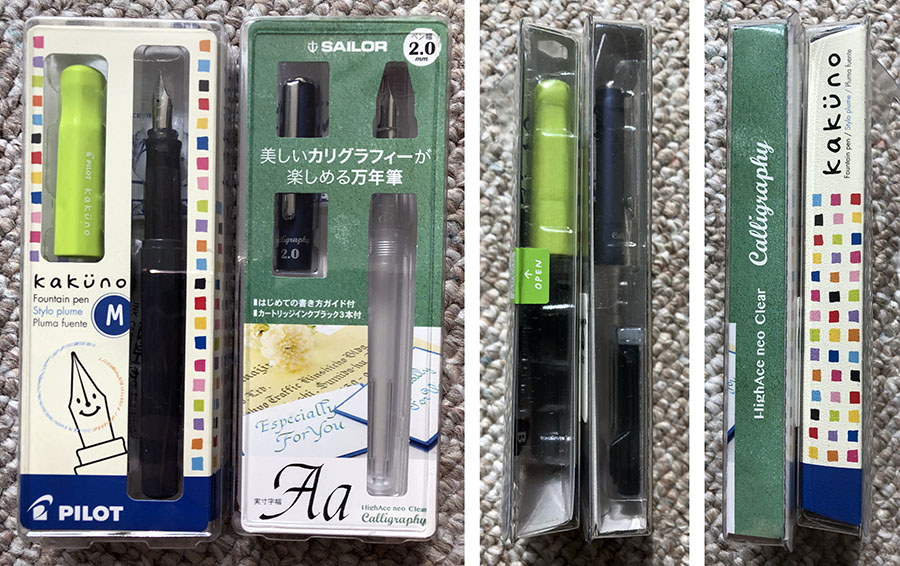 These two pens had similar packaging, so I took photos of them together. 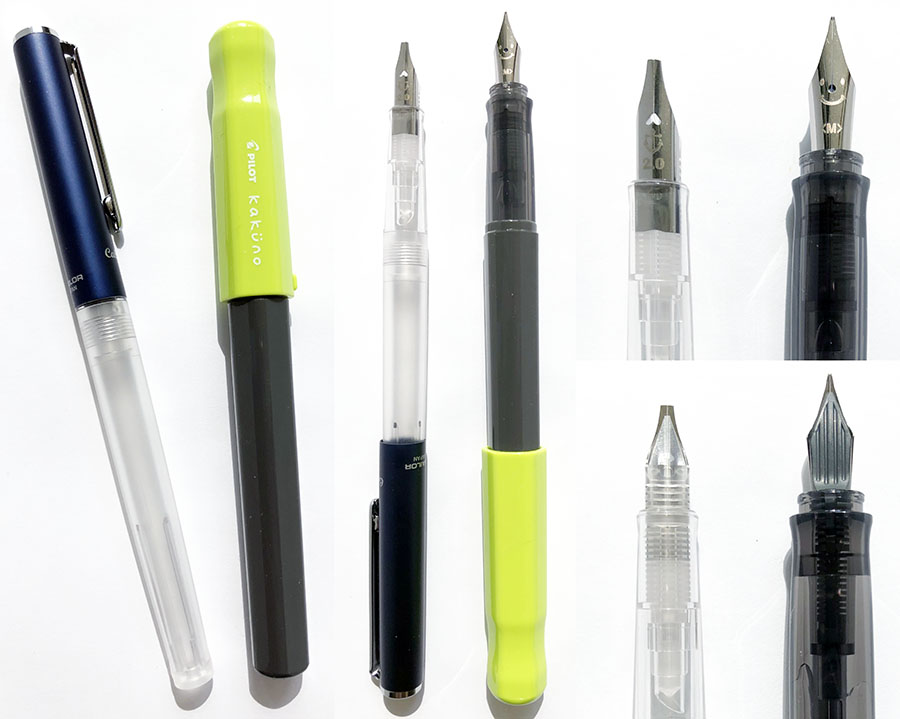 I love the cute face on the nib of my Pilot Kakuno! The packaging is very charming too. I'm weak for anything small and cute (Kakuno is for kids). I'm glad that the barrel was more of a warm dark grey than black like the photos. I was originally hoping to get the cream/yellow one, but they were discontinued, so I (bitterly?) took this colourway instead. Now that I see it in real life, I love it!

The pen wrote super smoothly out of the package! It's short and stubby. Now I look at my Pilot metro and think about how it isn't nearly as cute.

The heart breather hole and clear feed are lookers on this pen. I find that it writes kind of dry. These days I use it to fill in larger areas of black. I have no calligraphy skills :).

For both pens I have the given black cartridge in there, and I'll syringe fill it later when it's used up. No exciting inks for now! 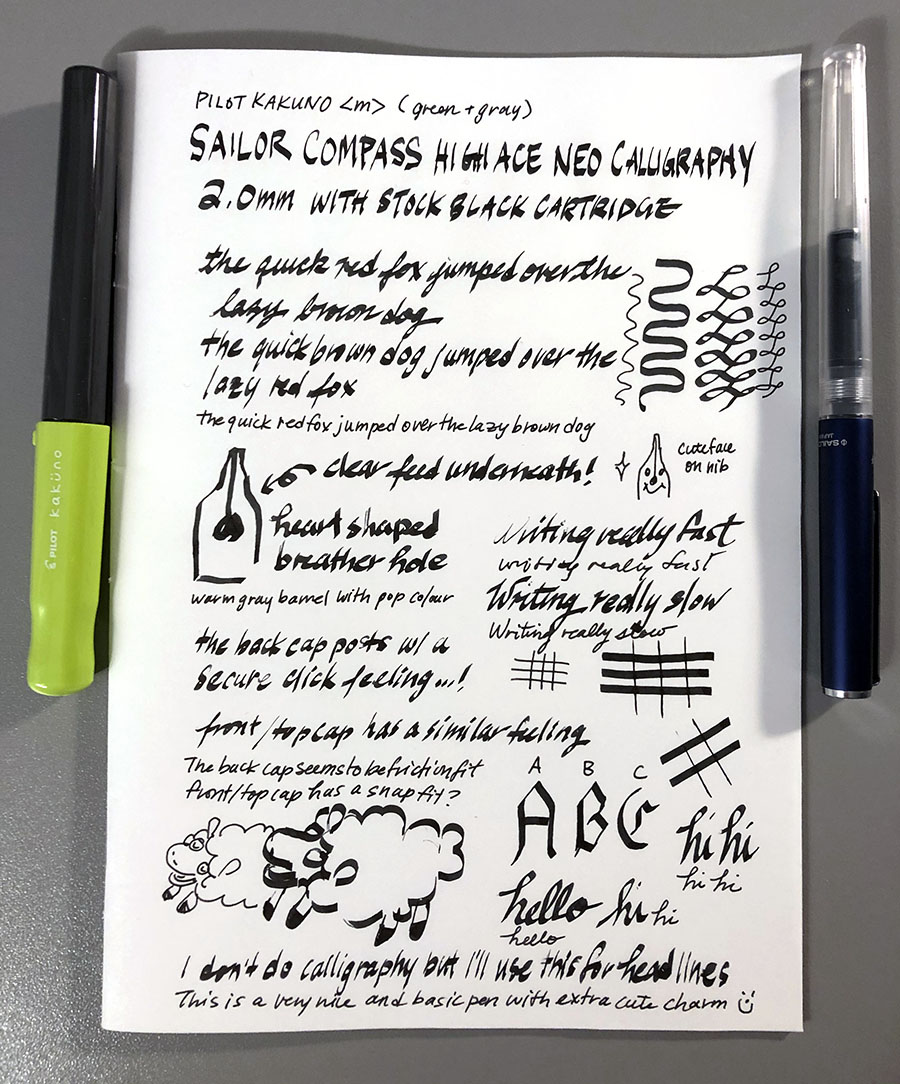 They're both really small compared to most of my other pens. 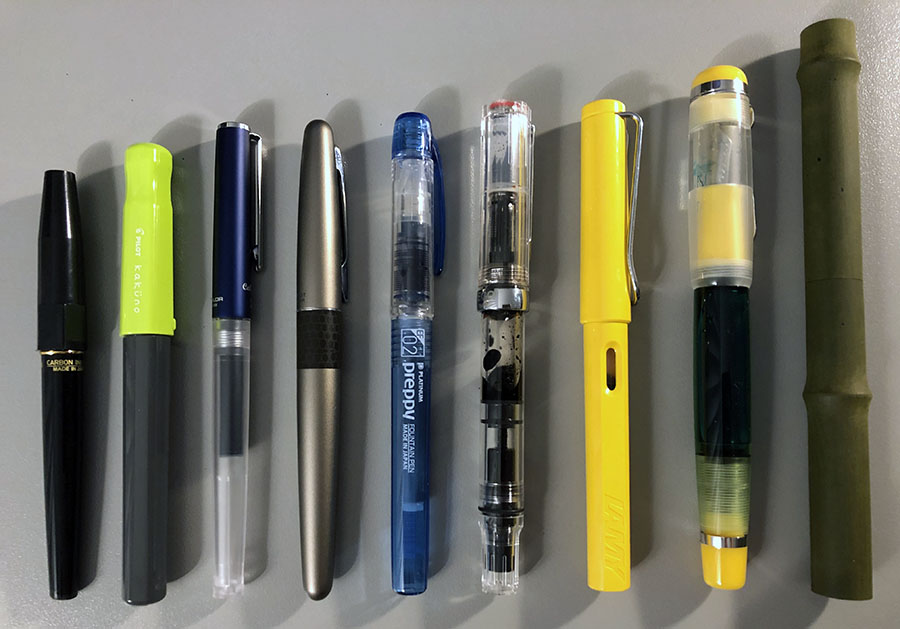 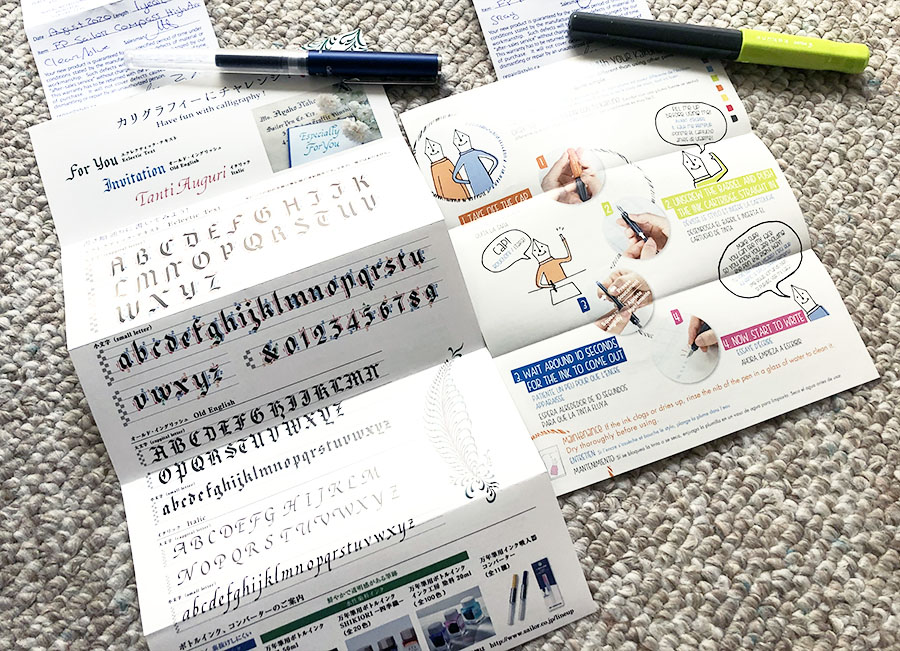 The Neo HighAce came with double sided sheet tutorial, one for how to do calligraphy. It's a nice touch/gesture, even though I really don't have the patience and motor skills for calligraphy, so this is just an insane stub pen for me to use to write headers for now. The Kakuno also came with charming wiggly handdrawn-looking instructions. I assume to appeal to kids, which I seem to be at heart. I like these personified talking nib heads a lot, they're just so pleasant!!

I've always wondered why cartridges aren't longer, because there is clearly MORE space left...? Perhaps it has something to do with pressure and vacuum?

Today's music post: The Real Folk Blues by Seatbelts [For these Virtual Days session]. There's also an interesting re-arranged-ish version with a lot of other artists/musicians/voice actors here.

I have a list of Canadian fountain pen + accessory vendors here.

I also have some other sample tubes that I'll eventually get through...

I have so much more than this but this is...the top of the pile.

I'm Dirchansky (she/her), a comic creator, storyteller, and settler living in Canada, on the territories of Indigenous people.

This is a space where I freely talk about anything I want; all opinions are my own.
Respectful comments are welcome in my guestbook or on any post.

Copyright Dirchansky © 2021. Do not copy, reproduce. download, or directly link to any images from this website without written permission. | BLUDIT